We started experimenting with cover crops on our farm in the fall of 2012. We’ve learned a lot over the last several seasons as we have expanded to where we now are putting covers on about a quarter of our acres going into the 2017 planting season. With a little experience under our belt, I thought I would share a bit about what cover crops are, why we use them, what we have learned, and where we still struggle.

What are cover crops? 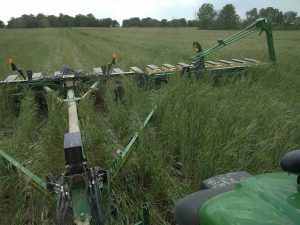 How we use covers

We have kept our use of cover crops pretty simple so far. If next year’s crop is soybeans the cover crop seeded the previous fall will be cereal rye. We simply broadcast 50 pounds an acre following corn harvest and let it be. We’ve established good stands of cereal rye planting it up into mid-November. We have messed with working it in lightly with tillage, but we don’t think it makes much difference over just leaving it alone. For the first few years we terminated the rye in spring when it was 12 to 18 inches tall. We planted soybeans when the rye was dead. The last two years we have planted “green.” This means the rye is sprayed just before or right after planting. This has worked very well, and we have learned the longer we let the rye grow the better weed control we get from the mat of dead material during the growing season. We have found it’s best to plant into cover crops when they are green and growing or crispy dead. Half dead cover is rubbery and causes problems with the planter performing well. Our beans following rye generally won’t get sprayed post emergence until a few weeks after soybeans with no rye see their first spray app. And that one sprayer pass is usually enough. Fields without cover will see a second trip, and sometimes a third. In both situations there was a preplant burndown with residual applied. Yields seem to be equal between rye and no rye. Saving one sprayer pass accounts for about half the cost of buying the cereal rye seed and having it spread.

We have tried two basic cover mixes ahead of corn. Either oats, tillage radish, and clover, or annual ryegrass in that mix in place of the oats. What’s nice about the oats and radish is they will die with cold winter weather. The downside is you get no spring growth from them so if winter comes early we may not see the growth we’d like. Two years ago winter was late and the oats and radishes didn’t die until the week after Christmas. Those fields had virtually no weeds going into planting the next year.

Our main struggle with covers comes from getting good fall growth out of what we want ahead of the following corn crop. We want a lot of growth before winterkill with the oats and radish, and the annual ryegrass and especially clover seem to need a fair amount of growth to survive the winter. So far we have applied the oats, annual ryegrass, radish, and clover mixes by airplane into soybeans before they are harvested. The end of August or early September is a good time for this in our area right as the soybeans are about to drop their leaves. Ideally a good rain shower right behind the airplane will help with good establishment. Dropping seeds from the air can be touchy. Sometimes we get a great stand, and sometimes we don’t. I would like to spread the cover with ground equipment or even plant it with a drill, but we haven’t gotten soybeans harvested early enough yet to make this happen even when planting early maturing soybeans. This spring we intended to take a couple days off corn planting to get some beans in the ground early for this purpose. The rain during this planting season washed those plans away.

At times we battle getting the seed trench closed while planting into a cover crop field. This is limited to cereal rye, and seems to be caused by the soil not always getting dry enough. At least not 100 percent ideal. I think the issue may be from the growing rye shading the soil which keeps it from warming up as fast as other fields. This year we had drier conditions when we got in the rye and closing the trench went much better than in the past.

The weather also comes into play even more than normal when trying to terminate a cover crop while the cash crop is being planted. This year I pulled the trigger on killing some of our cereal rye earlier than I would have liked. But with the frequent rains we had in April and May, we worried the rye could get out of hand quickly if sprayers couldn’t drive over wet fields. In a couple of fields we had thin stands of rye that allowed some marestail to get through. We figured it was more important to handle those tough weeds when they were small rather than let the rye get bigger which would also allow the weeds to grow and become really tough. 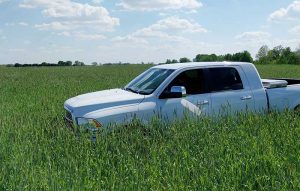 Great question. We don’t fully know the answer yet. It makes sense that if covers are pulling up soil nutrients that might normally be lost in the months without a cash crop we could potentially, over time, need to apply less commercial fertilizer. But we have also heard from some people that some of the biggest changes in soil organic matter they have seen is in continuous corn with a full tillage program, which is kind of the opposite of cover crops and no tillage at all. The big questions is when do decaying cover crops release those stored nutrients, when are those nutrients in plant available forms, and how much is there? Those things are hard to quantify on a field scale. Exactly what is gained financially by stopping erosion and surface runoff from heavy rains is pretty intangible and hard to put a number on. We need to get in the habit of leaving some strips of no cover in our fields to see how the cash crops perform in a side by side comparison.

We do know we are cutting at least one herbicide pass out of soybeans when we use cereal rye. That’s a cost savings, and using less pesticide isn’t the worst thing ever. Most of our fields that have covers are in EQIP (Environmental Quality Incentives Program). As of now with our current contract EQIP funding covers most of our seed cost. In some ways that funding limits us. We can’t harvest the covers as feed to sell to neighbors’ livestock or profit directly from them in other ways. Basically there’s no double dipping. If EQIP is paying us we can’t also sell the covers and make money twice. Something we didn’t think of initially is as long as those fields are in EQIP we can’t plant wheat on them. And winter wheat really is a cover crop between fall harvest and double crop soybeans the following summer. The difference is the wheat matures and we harvest it and sell it.

So we are still learning how to best manage covers, but we are sticking with them. Five years ago I wouldn’t have guessed I’d be driving my planter through 88 acres of chest high cereal rye headed out and beginning to pollinate. Not to mention it went pretty flawlessly, and after a few minutes and checking behind the planter I wasn’t nervous about it at all. There are some more methods to play with and mixes of seed to try, but for now we are keeping it pretty simple.

Brian Scott raises corn, soybeans, popcorn, wheat, and kids on an Indiana farm and blogs under the name The Farmer’s Life. His goal is to promote the virtues of modern agriculture and feature the operations of his farm.

Your browser is out-of-date!

Update your browser to view this website correctly. Update my browser now